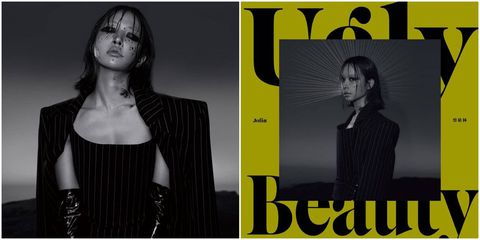 This is a mini tribute to one of the best albums for the past few years, which rightfully won album of the year at the 30th anniversary of Golden Melody Awards in Taiwan, equivalent to Hollywood’s Emmys.

Ugly Beauty ticks all the boxes from vocals to melody to the flow and connection among the 11 songs in the album. Right from the first song, a peek into the inner demons – 恶之必要 (the necessity for evil) – provided a dark and mysterious introduction to the album.

The title song – Ugly Beauty 怪美的 – was one that took the longest to appreciate, and perhaps purposely so. On the surface, the 3-minute song was more like a rap to diss on the standards of beauty in modern society. Then, you listen to the blends of Jolin’s voice in different octaves, and then the genius additions of the mouthful sounds… probably to represent the judgments and nasty comments online. There’s so much depth to the song!

One of my favourites for this song, is to pair the melody with the visuals. The music video reflects the standards and criticisms she had faced as an artist, but in fact, these transcend our everyday lives – being judged a certain way, having to conform to a certain mold. There is an emotional scene where Jolin, in her svelte figure, looks at her bloated reflection… what a sad truth and moment for females and especially female celebrities.

The album’s only ballad – 爱的罗曼死 Romance – plays with the word ‘death’ in the romance. The approach to the song was more of Jolin pouring her personal stories and bottled up emotions to a close friend. Interesting use of lyrics in the song too – nothing too poetic, but damn right realistic. I’m not biased towards ballads, but this was one of my favourites in the album.

Then it came to a very controversial title – 消极拜 Life Sucks – which has two of the sounds alluding to a vulgarity used in the Hokkien language. Jolin uses a very bored and annoyed tone to finish the song, but hey don’t we all have these moments where we drag our words and just can’t be bothered anymore? The moral of the song – it’s okay to feel defeated, just remember to get back up again. How apt.

To me, a great album is where you can proceed through the entire album without having to skip songs. The second time round, you can listen to the album in sequence, not in shuffle. I only have praises for the album, and congratulations for the well-deserved win.